Throughout the decade of the 1850s, mid-Marylanders and their near-by neighbors in Pennsylvania and Virginia found themselves trying to 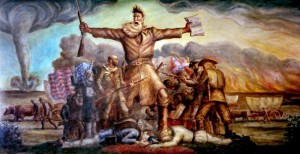 navigate a path through the increasingly tense sectional disagreements between the North and the South.  Residing in a non-slaveholding state, most Pennsylvanians aligned themselves with the Northern position.  For opposite reasons, most Virginians on the Potomac River border saw themselves entwined with Southern policies.  Mid-Marylanders, on the other hand, had extensive ties – politically, economically, and socially – with both the North and the South.  As sectional discord became more difficult to contain, citizens in this border region became witnesses to, and participants in, some of the most cataclysmic events that preceded the outbreak of war. By 1861, these border residents were faced with difficult, at times agonizing, choices as the country lurched toward war.