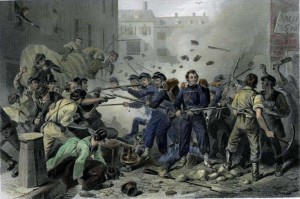 The citizens of mid-Maryland lived in a crossroads of both political and military action. The location of the nation’s capital meant that Maryland’s loyalty was essential for the Union, and the federal government would take extraordinary, sometimes extra-legal, steps in mid-Maryland to ensure that the loyalties of its citizens would remain with the Union.  Citizens in the Confederacy were likewise asked to give up certain civil liberties in the hope that doing so would advance their liberty and security in the future.  Civil liberties thus became a casualty of civil war for both the Union and the Confederacy.