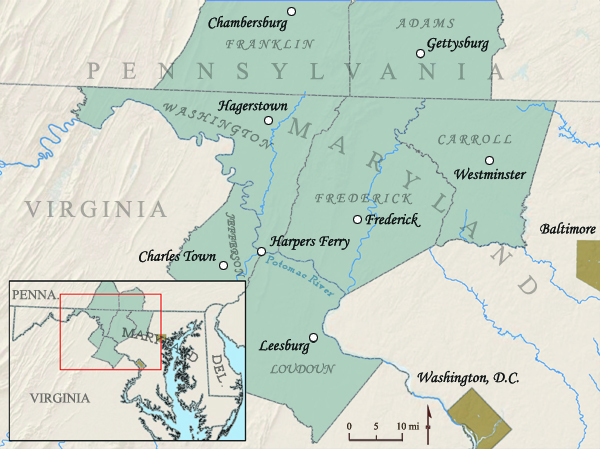 On April 12, 1861, Confederate forces bombarded the Union garrison at Ft. Sumter in South Carolina, igniting the Civil War.  The border state of Maryland would eventually commit itself to the Union cause, but tensions and divided loyalties continued to assert themselves throughout the war.  Citizens of the mid-Maryland border region, composed of central Maryland and parts of neighboring states, had to cope with the profound impact of the war as armies from both the North and the South marched, camped, and fought here.  Discover the compelling stories of the Civil War experience in the mid-Maryland border region in the following sections:

This section explores the events leading up to the war.  John Brown  launched his raid on Harpers Ferry, Abraham Lincoln was elected president, and the border state of Maryland wrestled with its loyalties.

Fighting on the Border

Union and Confederate armies both tried to gain control of this  important border region.  Read about the military activity here,  and about the major engagements at Antietam, Gettysburg, and  Monocacy.

The life of civilians changed dramatically because of the war.  Churches became hospitals, property was destroyed or confiscated,  and military regulations intensified the tensions.  Discover the ways that civilians on the homefront experienced and contributed to the war effort.

African Americans made momentous decisions in their quest to be   free.  Explore the way the war affected them and the choices they  made, including enlisting in the Union army.

Officials from both the US and Confederate governments violated the civil liberties of civilians in order to advance their  war efforts.  Consider the arrests of civilians, the suspensions of habeas corpus, and the banishment of some individuals and  families considered to be disloyal.

Women and Children in the Midst of War

Women and children encountered the war in their own way as they  participated behind the lines and on the lines, and made tremendous  sacrifices.  Read about the hardships they endured and about the  ways they supported the soldiers.

After the war, mid-Marylanders struggled to reintegrate into their communities returning veterans from both sides of the war.  The  role of African Americans was contested as they became free  enfranchised citizens with the 13th, 14th, and 15th amendments.

Efforts to remember those who participated in the war stirred controversy along with commemoration. Cemeteries were filled with soldiers who fell here, but sometimes only one side was welcome.  Preserving battlefields and holding reunions were other ways of honoring veterans.