In July 1864, four women risked charges of treason to smuggle supplies for Confederate soldiers across the Potomac River. Their story begins on the Maryland-Virginia border in northern Loudoun County, a place of divided loyalties and fierce fighting, and serves to challenge conventional notions regarding nineteenth century women as weak and apolitical.

The climate of war that framed the journey of Elizabeth White, Kate and Betsie Ball, and Annie Hempstone into Union territory to obtain supplies was one of increasing desperation for the Confederacy. The women’s illicit crossing of the Potomac from Virginia to Maryland coincided with a 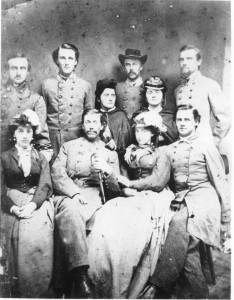 renewed burst of fighting on the border. In July 1864, General Robert E. Lee had ordered General Jubal Early to initiate an attack against Washington D.C., and in tandem with this offensive, Col. John S. Mosby was sent to sever communication lines between Washington and Harpers Ferry. Col. Mosby succeeded in defeating Union forces at their Point of Rocks base on July 5, 1864, and spent the evening dining at the Confederate enclave of Temple Hall. Temple Hall, located north of Leesburg, was the residence of Henry Ball, the father of two sons in the Confederacy. Ball himself briefly fought early in the war and was once imprisoned for refusing to pledge allegiance to the Union. Also living there during this time was Elizabeth White, the wife of Confederate cavalry officer Elijah V. White. Mrs. White was not present at that night’s festivities, however, for on that morning she and three friends had embarked on a daring mission north into Maryland to retrieve supplies for “our dear Maryland boys in grey.” Annie Hempstone later wrote of their adventure as a “little trip across the Potomac,” which belied the true perils of their journey.

While guns blazed just up the Potomac River in nearby Point of Rocks on the morning of July 5, 1864, Elizabeth White, Kate and Betsie Ball (daughters of Henry Ball), and Annie Hempstone hurriedly crossed the Potomac at White’s Run.  Once in Montgomery County, the four friends quickly set upon their covert mission to collect boots and clothing for Confederate soldiers. The next day, their hoop skirts 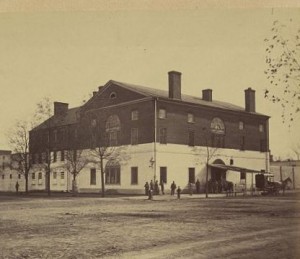 heavily laden with concealed supplies, the women attempted to return to Loudoun County, only to find that Union guards had arrived and a river crossing was impossible. The women were forced to retreat to the Dickerson, Maryland home of Elizabeth White’s mother, and fearing arrest, hid their clandestine goods in the walls of the house. Their concerns were soon validated, as the four women were arrestedand transported to the Old Capitol Prison in Washington, D.C. (coincidentally where Henry Ball had been imprisoned in 1862.) Though the women were intimately connected to the Confederacy and known to harbor secessionist views, no evidence could be found to support the charge of spying. The women  maintained that their business in Montgomery County was mere pleasure, and they were released three weeks later. Somehow managing to evade detection, Elizabeth White and her comrades promptly returned to the house in Dickerson, where they retrieved their concealed items, and once again attempted to cross the river, this time at Edward’s Ferry.

The river crossing was a precarious and tension-filled affair due to the heavy (and treasonous) loads each woman was secretly carrying beneath the folds of her dress.  Annie Hempstone seemed to relish the opportunity to incite the ire of the Union guards:

The many letters I received from soldier friends while in prison I was unwilling to give up, so, in packing my valise, I placed them on top, that they might be seen by the Yankee guards who would search our baggage. When they opened my valise and the letters rolled out by the dozen, which I purposefully arranged to aggravate the inspector. I laughed, which was considered a great insult, and he exclaimed in anger: “If I had my way, I would send you straight back to prison where you came from.”

Annie Hempstone likely laughed at that as well.

Upon arriving in Virginia, the boots and clothing were distributed to Col. White’s grateful cavalrymen. Elizabeth White, Annie Hempstone, and Kate and Betsie Ball had done more than deliver boots to Confederate soldiers, however.  These women had taken great risks in order to accomplish their mission, and in the process had demonstrated their courage, their political resolve, and their willingness to enter the arena of the war to support their soldiers.  They were, clearly, neither weak nor apolitical.

This essay was contributed by Ariel Burriss, B.A. from University of Maryland, an intern with the Catoctin Center for Regional Studies.